The collection which did not exist
Next Video 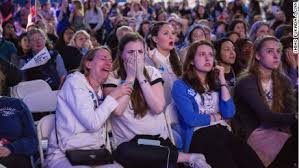 The key moment in the 2016 US presidential elections that everybody knew that Donald Trump had won, was when the results from Pensylvannia came in. The above NewsReel shows Bloomberg News’ Megan Murphy and David Gura discuss Associated Press declaring Donald Trump the winner in Pennsylvania. Below are listed the key moments of the 2016 election day, culminating into the moment that Trump won.

7.05pm (ET)/12.05am (GMT) The first projections for the election results are called by the Associated Press, and they follow the form guide. Trump wins Indiana and Kentucky, while Clinton takes Vermont. Vermont has voted solidly Democratic in every presidential election since 1988 and Kentucky similarly Republican since 1996.

10.39pm/3.39am A big win for Trump as he takes Ohio, the first swing state to be declared for the Republicans. He had led in the polls all along but Democrats made much in the final weeks of a possible victory. Voters in the state have correctly picked every single US president since 1964.

10.53pm/3.53am Trump’s path to the White House suddenly becomes a lot clearer, and Clinton’s a lot harder, as he takes the key battleground state of Florida and its 29 electoral votes.

11.14pm/4.14am Trump wins North Carolina, dealing another blow to Clinton, who had looked strong in polling. The battleground state voted Democrat in 2008 and Republican in 2012. The Clinton camp now pins its fading hopes on claiming something from Pennsylvania, Michigan and Wisconsin.

11.56pm/4.56am Trump’s apparent march towards the White House continues with victory in Utah. Ten minutes later he follows up by taking Iowa.

1.35am/6.35am Trump finally clinches Pennsylvania, another key battleground state, making his lead virtually unassailable. Clinton long viewed the state as a key part of her “firewall” and had held a rally Philadelphia with Barack Obama on Monday night. Trump is now at 264 electoral votes and ahead in counting in Wisconsin, Michigan, and Arizona, any of which makes him presiden

The election result from Pennsylvania came as a shock for Clinton fans and as a kind of deliverance for supporters of Trump – Trump had won Pennsylvania thereby giving a decisive blow to Hillary Clinton’s possibilities of becoming the first female president of the United States. Although the signs were already there prior to election day, few had anticipated this outcome – and if they did, not in the way that it came. The moment had left the country completely divided and in the hands of a president that had not won the popular vote. (Learn how a candidate can win the US presidency while not winning the popular vote – The Electoral College Explained)

The collection which did not exist