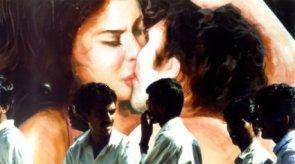 Fatal Reaction Bombay’, the final episode of a four-part personal odyssey of Marijke Jongbloed, concentrates on the way in which relationships are forged and mystified in the cosmopolitan part of India. The modern Indian woman struggling to break out of the confinements of her traditional fate has a lonely path to clear. In her attempt to determine her own future – including choosing her own partner – she clashes with religious, cultural and familial restrictions with no singles scene nor matriarchal camaraderie to back her up. The films shows how arranged marriages work.

‘Fatal Reaction’ is a four-part documentary series about highly educated career women and their problems finding a husband who is their equal. Director Jongbloed’s series explores the choices of professional women in relation to marriage and family in New York, Moscow, Bombay & Singapore. Central dramatic question: Why are so many career women unable to find a compatible partner?

Among Indian women, for whom the tradition of arranged marriages is still prevalent, she finds willing embrace of modern matchmaking services, but not much marital success for professionals. Many women are frustrated by men’s refusal of highly educated and independent women as wives. Through interviews with a wide range of young people, the film creates a fascinating portrait of both sexes trying to bridge centuries of tradition. Highlighting the series are many clips of mass media imagery about dating, marriage and gender roles, which illuminate often-bizarre juxtapositions of Western style with Indian culture.

In 1994 I began to notice that the majority of successful career women I knew were single. I looked questioningly around me: was it just in my own town Amsterdam, or was this a worldwide phenomenon? My quest was at first not an easy one: for most high profile women in my own country, the issue of remaining single, was the one aspect of their lives they didnt want to talk about. In New York the women were more open to talk and after my first episode (Fatal Reaction-New York) was released, the discussion caught fire. Newspaper, glosses and talk shows brought the topic out into the open. The more I researched and branched out into the world, the more I realized that this topic is one of the most burning issues of the modern era. Screenings at other film festivals from New York to Sydney have all turned into memorably heated and powerful discussions. My choice to include Bombay into the series was confirmed by the following quote from the controversial Indian writer Shobha De: For most Indian women marriage is a life-long lie. They are in it because their options (if any) are limited. It is marriage or wasteland.

This popular documentary series has been aired frequently by numerous broadcasters worldwide. In addition, each part has had a successful international cinema release with prominent screening at many leading film festivals, all turning into heated discussions. FATAL REACTION – Bombay was chosen as one of the most celebrated movies at the Sydney Film Festival and also won a special jury Award for in Singapore (1998) and at the 5th International Film Festival Delle Donne in Torino.