The liberation of Rome – General Clark
Next Video 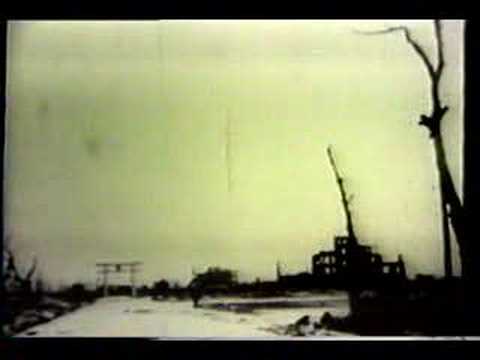 Scene from ‘Hiroshima Nagasaki’, a documentary by Paul Ronder.

Around 7.15 am on August 6, 1945 Japanese radar detected three American aircraft flying south at high altitude. Because it was thought the planes were on reconaissance, the air raid alert was lifted. At 8.16 am, the leading B-29 bomber, named, Enola Gay, dropped ?Little Boy?, an enriched uranium bomb, over the city of Hiroshima. Three days latter, ‘Fat Boy’, a plutonium bomb was dropped on Nagasaki. “Hiroshima-Nagasaki” is a monologue interieur set against the background of unique movie footage in the cities right after the bombs exploded.

The liberation of Rome – General Clark