The Khmer Rouge was a brutal regime that ruled Cambodia, under the leadership of Marxist dictator Pol Pot, from 1975 to 1979. Pol Pot’s attempts to create a Cambodian “master race” through social engineering ultimately led to the deaths of more than 2 million people in the Southeast Asian country. Those killed were either executed as enemies of the regime, or died from starvation, disease or overwork. Historically, this period—as shown in the film The Killing Fields—has come to be known as the Cambodian Genocide.

Although Pol Pot and the Khmer Rouge didn’t come to power until the mid-1970s, the roots of their takeover can be traced to the 1960s, when a communist insurgency first became active in Cambodia, which was then ruled by a monarch.

Throughout the 1960s, the Khmer Rouge operated as the armed wing of the Communist Party of Kampuchea, the name the party used for Cambodia. Operating primarily in remote jungle and mountain areas in the northeast of the country, near its border with Vietnam, which at the time was embroiled in its own civil war, the Khmer Rouge did not have popular support across Cambodia, particularly in the cities, including the capital Phnom Penh.

However, after a 1970 military coup led to the ouster of Cambodia’s ruling monarch, Prince Norodom Sihanouk, the Khmer Rouge decided to join forces with the deposed leader and form a political coalition. As the monarch had been popular among city-dwelling Cambodians, the Khmer Rouge began to glean more and more support.

For the next five years, a civil war between the right-leaning military, which had led the coup, and those supporting the alliance of Prince Norodom and the Khmer Rouge raged in Cambodia. Eventually, the Khmer Rouge side seized the advantage in the conflict, after gaining control of increasing amounts of territory in the Cambodian countryside.

In 1975, Khmer Rouge fighters invaded Phnom Penh and took over the city. With the capital in its grasp, the Khmer Rouge had won the civil war and, thus, ruled the country.

As a leader of the Khmer Rouge during its days as an insurgent movement, Pol Pot came to admire the tribes in Cambodia’s rural northeast. These tribes were self-sufficient and lived on the goods they produced through subsistence farming.

The tribes, he felt, were like communes in that they worked together, shared in the spoils of their labor and were untainted by the evils of money, wealth and religion, the latter being the Buddhism common in Cambodia’s cities.

Once installed as the country’s leader by the Khmer Rouge, Pol Pot and the forces loyal to him quickly set about remaking Cambodia, which they had renamed Kampuchea, in the model of these rural tribes, with the hopes of creating a communist-style, agricultural utopia.

Declaring 1975 “Year Zero” in the country, Pol Pot isolated Kampuchea from the global community. He resettled hundreds of thousands of the country’s city-dwellers in rural farming communes and abolished the country’s currency. He also outlawed the ownership of private property and the practice of religion in the new nation.

Workers on the farm collectives established by Pol Pot soon began suffering from the effects of overwork and lack of food. Hundreds of thousands died from disease, starvation or damage to their bodies sustained during back-breaking work or abuse from the ruthless Khmer Rouge guards overseeing the camps.

Pol Pot’s regime also executed thousands of people it had deemed as enemies of the state. Those seen as intellectuals, or potential leaders of a revolutionary movement, were also executed. Legend has it, some were executed for merely appearing to be intellectuals, by wearing glasses or being able to speak a foreign language.

As part of this effort, hundreds of thousands of the educated, middle-class Cambodians were tortured and executed in special centers established in the cities, the most infamous of which was Tuol Sleng jail in Phnom Penh, where nearly 17,000 men, women and children were imprisoned during the regime’s four years in power.

During what became known as the Cambodian Genocide, an estimated 1.7 to 2.2 million Cambodians died during Pol Pot’s time in charge of the country.

The End of Pol Pot

The Vietnamese Army invaded Cambodia in 1979 and removed Pol Pot and the Khmer Rouge from power, after a series of violent battles on the border between the two countries. Pol Pot had sought to extend his influence into the newly unified Vietnam, but his forces were quickly rebuffed.

After the invasion, Pol Pot and his Khmer Rouge fighters quickly retreated to remote areas of the country. However, they remained active as an insurgency, albeit with declining influence. Vietnam retained control in the country, with a military presence, for much of the 1980s, over the objections of the United States.

Over the decades since the fall of the Khmer Rouge, Cambodia has gradually reestablished ties with the world community, although the country still faces problems, including widespread poverty and illiteracy. Prince Norodom returned to govern Cambodia in 1993, although he now rules under a constitutional monarchy.

Pol Pot himself lived in the rural northeast of the country until 1997, when he was tried by the Khmer Rouge for his crimes against the state. The trial was seen as being mostly for show, however, and the former dictator died while under house arrest in jungle home.

The stories of the suffering of the Cambodian people at the hands of Pol Pot and the Khmer Rouge have garnered worldwide attention in the years since their rise and fall, including through a fictional account of the atrocities in the 1984 movie The Killing Fields.

Cambodia gained independence from France in 1953 and was ruled by Norodom Sihanouk until 1970, when he fell victim to a coup organized by Prime Minister and others. Lon Nol became the head of state and a guerrilla conflict began. Despite support by U.S. military forces and the government of South Vietnam, he was ultimately forced to cede power to the guerrillas and their leader, Pol Pot. The Khmer Rouge, officialy called The Communist Party of Kampuchea, carried out a radical program from April 17, 1975 till January 1979 and caused a genocide.

In 1975 the Khmer Rouge, originated from the Indochinese Communist Party and Peoples Revolutionary Party, seized power in Cambodia. Revolutionary Pol Pot became the leader of the party. In power, the Khmer Rouge carried out a radical program that included minimizing foreign influence, closing schools, hospitals and factories, abolishing banking, finance and currency, outlawing all religions, confiscating private property and relocating people from urban areas to collective farms. The Khmer Rouge retreated to the Western area of the country after the 1979 Vietnamese invasion. The inevitable implosion of the Khmer Rouge was completed with Pol Pots arrest in 1997. Hun Sen is the current Prime Minister of Cambodia and leader of the Cambodian People’s Party .

Pol Pot and the Khmer Rouge – Part I: Politics of power and terror

When in 1975 the Khmer Rouge seized power, the Cambodian population, tired of Lon Nol and the bloody civil war, welcomed the soldier...
0
109
0
0 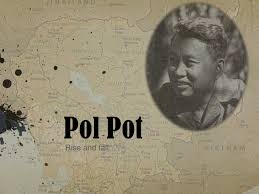 Who exactly was the Janus-faced Saloth Sar: a polite child, a friendly teacher, a charming politician, or a cruel, relentless murder...
0
85
0
0